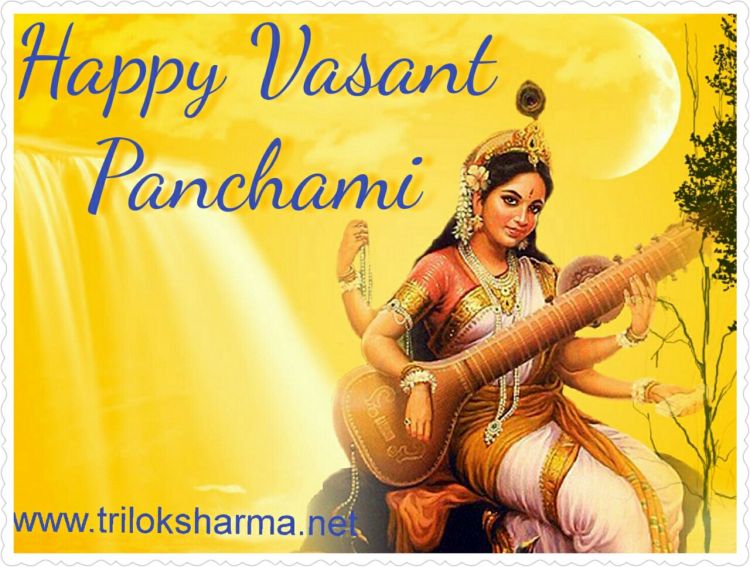 India is a country of festivals and celebrations. It has a festival for each significant event of life that gives an opportunity to celebrate that particular event.

Similarly, we celebrate the day of starting of the Spring (Vasant) season. Who doesn’t love the spings?? The festival is celebrated by Hindus;across the world on the fifth day (Panchami Tithi) of the Hindu month ‘Magh’ –here Vasant stands for spring and ‘Panchami’ for ‘the fifth day’.

To make this day more significant, Indian culture and mythology have so many connected reasons and beliefs.

According to popular belief, goddess Saraswati – the deity of knowledge, music, arts, science and technology – was born on this day and people worship her to achieve wisdom. Goddess Saraswati, a pristine woman in a white attire and white jewellery, seating on a white lotus riding a swan, holding a Veena, is adorable.The goddess signifies feminine principle of formation, as the companion of creator Lord Brahma. She signifies the feminine principle of art and music in a true sense without any fear or manipulation. According to Veda, Saraswati represents ‘Ananda’ a surge of love, bliss and beauty. Her hands denote four faces of human personality –mind, intellect, alertness and ego. While the lotus symbolises true knowledge and the swan is known for its unique ability to separate water from milk giving us the message to eliminate bad from the good.

Another popular folklore that’s associated with the festival is that of the legendary poet Kalidasa.

The love connection
But there are many other stories related to Vasant Panchami as well. The second one is linked to Shringara Rasam, which is all about love, attraction and beauty. According to mythology, Kamdeva (God of Love and attraction)  had been turned to ashes by Lord Shiva for his misdeeds, and his wife Rati went through an arduous 40 days of penance to bring her husband back. On the day of Vasant Panchami, Shiva finally relented and brought Kamdeva back to life. Which is why Kamadeva, the god of love and desire, is worshipped along with his wife Rati on this day. Gradually, the western world also followed it and started celebrating as Velentines day.

In celebration, women would dance and musicians would play the dhol, while singing different ragas based on the theme of love, showering red gulal – indicating the onset of Holi soon – and flowers at the end of the celebration.

Yet another legend elucidates the observation of this festival since the Aryan era. It is believed that the Aryans travelled through Khyber Pass and crossed the Saraswati River to reach India. When they settled in, the Saraswati River became an important source of life for them, so the celebration became a routine.

This day is also considered as an auspicious day to begin new work. Interestingly, the colour yellow holds great significance during Vasant Panchami as it is associated with the colour of mustard flowers that bloom during this season, so wearing yellow is also encouraged. It is also considered very auspicious to get married or perform house warming ceremony (griha pravesh) on the day of Vasant Panchami.

Significance of the festival: